Prior to importing goods, agencies should conduct a thorough analysis of all customs guidelines and requirements, including any restrictions and the necessary documentation. Clearing agents/customs brokers and national authorities can help guide importers on the steps and documentation required. In emergencies where a national Logistics Cluster is activated, participating members can also share import relevant information as needed. In any situation – emergency or not – there should be a clear understanding of what steps are required and a clear plan of how to move.

It should be noted that this process may be altered in the face of rapid-onset emergencies, but not always.

As the need for international shipments develop, there are key steps that any organisation or entity initiating shipping will need to undergo. Response organisations acting as exporters/shippers will need to take key actions to obtain information and coordinate shipments:

An organisation or an entity acting as importer or consignee intending to receive a shipment should also take steps to properly prepare and identify needs. 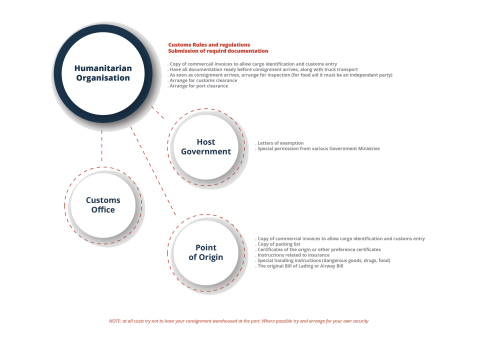 In emergencies, the authorities will usually ask for originals or copies of the following documents:

Most large seaports and international airports have the capacity to carrying out customs inspections, storage and clearance on site. For customs clearance to be official, there will need to be offices designated to the relevant customs authority and space for storage of goods undergoing customs.

The main formalities connected with the handling of goods by authorities in the export or import trade are as follows:

For cargo arriving by air:

For arriving by sea:

When planning arrival of cargo, it is extremely important to know if customs is an option, especially in post rapid-onset emergencies. There may be instances where planes or boats may be physically able to arrive at a seaport or airport, but not actually able to legally import goods.

The following steps detail the process through which cargo is handled and inspected by customs after arrival and offloading: 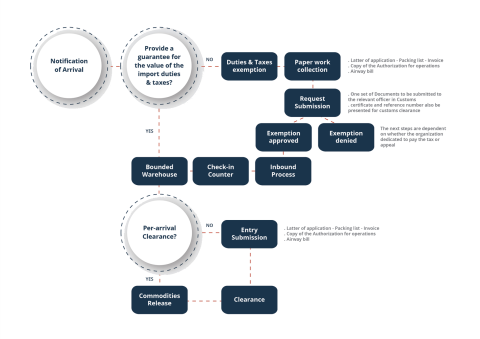 Customs authorities will use paper copies of all associated documentations - and depending on the context and the capacity of the customs authority, electronic copies - to identify cargo going through the physical inspection process.

If the importer or the customs broker acting on their behalf fails to obtain paperwork by the time customs clearance should begin, the submission procedure will be delayed, and the release of cargo will be delayed or not happen at all. The consequences of frustrated cargo result in delays in the delivery to beneficiaries, or additional costs such as demurrage. Within a short period of time, large amounts fees can accumulate for which the receiver is held accountable.