The type of fuel dispenser required depends on the location, functionality and overall needs of the operation. Ideally, any fuel dispenser in use will have access control and a calibrated counter that records fuel dispensed over time.

Additionally, the quality of the fuel will also guide how fuel will be dispensed to users. Fuel from unknown or low quality sources will often come with debris or sediment, or the mixture itself may be impure. If pumping low quality fuel, then users may require a filter (screen or cloth) as fuel comes out of the pump. Other general rules:

There are multiple types of handpumps, however they all follow the same logic; the pump is manually inserted into the fuel container, and fuel is drawn by mechanical hand motion. Hand pumps are useful when: 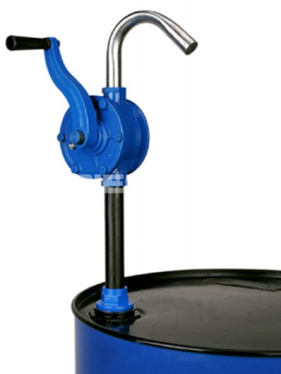 Hand pumps don’t always have the ability to give a readout of flow, meaning persons using the hand pumps must find alternate ways of tracking and recoding the volume of fuel dispensed. One method is to pump fuel into standardized containers of known size (example: 20 Litre jerrycan). As quantities are dispensed, dispensers should also record outflow in a long book or stock card.

Pumping stations ideally should not attached to or right next to fuel tanks – vehicles moving around and electrical equipment are additional hazards to fuel management. Additionally, a separating wall between tanks and pumps might mitigate risks associated with spills of fuel or fire related incidents. Even with safety precautions, pumping stations will still always be relatively close to fuel tanks, and personnel conduct around a pump station should be the same as any commercial refuelling station – no smoking, no open flames and always pay attention to safety!

Pumps used to convey fuel from one tank to another tank usually high volume, purpose built pumping mechanisms. Delivery trucks meant to fill up revisors or tanks should have their own sub pumps that are either diesel powered, or draw electricity directly from the truck engines.

A gravity fed distribution system works by using gravity to carry fuel relatively short distances. The system works by placing the tank on a platform or elevated position, and feeding fuel from the side of the tank to a lower position using a hose.

The advantages of a gravity fed system include:

However, the disadvantages of a gravity fed system are:

Fuel tanks/reservoirs are ideal for gravity fed fuel distribution systems, however proper plans must be made when developing a gravity fed solution.

Tanks used for gravity fed distribution must be at sufficient height. The discharge point of the tank must be at least 50 cm above the highest point of distribution nozzle, however drops of 2-3 meters are recommended to adequately move fuel.

Platforms for elevated tank storage should be adequate for the anticipated weight of the planned storage container (estimate at least 0.85 kg per litre of storage + weight of the tank itself).

Ideally, gravity fed lines will be made of rigid pipes that run directly to the distribution points. Pipes should be clearly marked, and not exposed to hazards. Wherever possible, gravity fed pipes should be run overhead to final destination.