Global Positioning System (GPS) enabled devices and services are quite common for modern day technology such as computers and cell phones, and many current users interact with systems benefiting from GPS daily. The underlying concept behind GPS was once considered relatively exotic, and was used primarily by governments.

GPS enabled devices work by speaking to a loose network of navigational satellites called the Global Navigation Satellite System (GNSS) that continually orbit the earth at a variety of orbital altitudes and speeds. GNSS satellites continually transmit a weak radio signal that devices on the ground can detect. A GPS enabled device requires concurrent line of sight to at least three GNSS satellites to triangulate is position on the earth. Navigational satellites were first launched in the 1970s by the United States government for military use only, however by the mid-1990s GPS had become widely available for commercial use. Today, the GNSS constellation is made up from dozens of satellites from a variety of countries.

GPS enabled devices communicate in a coordinate system, which are generally known as “GPS Coordinates”. GPS coordinates define an exact location the surface of the earth within a pre-defined grid system. There is more than one grid system used, however the vast majority of communications systems are built on latitude and longitude:

Lines of Latitude – Lines of latitude are horizontal lines that stretch from east to west across the globe. The longest and main line of latitude is called the Equator. 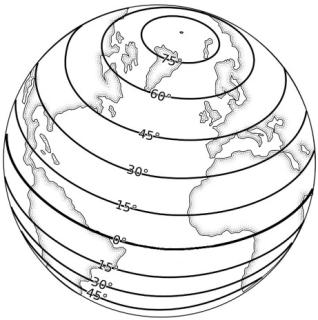 Lines of Longitude - Lines of longitude are vertical lines that stretch from the North Pole to the South Pole. The main line of longitude is called the Prime Meridian.

The Prime Meridian is represented as 0° longitude, while vertical lines east and west increase incrementally until 180°, making 360° in total. 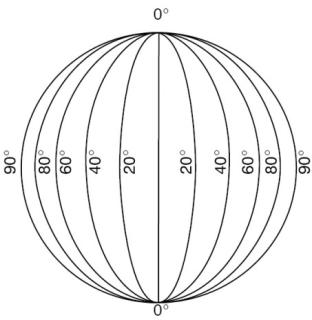 Combined together, the grid structure generated from combining longitude and latitude would look like:

To more accurately describe GPS coordinates, the lines of longitude and latitude are broken down into smaller and smaller increments. Detailed incremental GPS coordinates can provide accurate locations anywhere on the earth’s surface to down to less than a square meter.

There are number of GPS devices available on the market for humanitarian organisations, all of which will have their own user requirements and instructions. It is important that users understand what the intended use of the GPS device is when making a selection.

Offline/Standalone – Many GPS devices are designed for the sole purpose of taking GPS readings. Usually these devices have a simple interface, and a powered by disposable or rechargeable batteries. Offline GPS units are frequently used for maritime, aviation and military, but are also use for wilderness orientation, extractive industries, or any application that requires being far away from a mobile or internet connection. Offline GPS devices are generally just passive receivers of GPS signals from GNSS satellites, and will provide a flat set of coordinates when in use. Some GPS devices have mapping functions or the ability to leave waypoints. The need for these additional features will depend on the use and the agency.

Online/Phone Based – Most modern smart phones come with GPS capability, as well mapping and tracking applications. While most users are familiar with phone based GPS apps, there are a few important things to consider:

Before relying on a smart phone as a primary GPS device, users should consider: