There has been an increase in the number of and availability of mobile voice and data devices that work off communications satellites. These devices usually run off proprietary satellite arrays that have their own configurations, shortcomings and special considerations.  Many companies that started offering only one type of voice or data solutions have begun offering a spectrum of products for both voice and internet utilising their own satellite networks. For this reason, it makes sense to speak about them by provider instead of by service type.

The Iridium satellite constellation is one of the earliest entrants into the mobile satellite communications services market, going online in 1998 and providing continuous service since. Today, Iridium is widely used by military, commercial companies, and humanitarians alike.

The Iridium network is comprised of 66 LEO satellites that orbit the earth from pole to pole, and utilise the L Band for uplink and downlink.

Originally, Iridium provided voice only service, using large handsets that communicated with the overhead satellites, however Iridium now offers limited data service for internet connection. The basic idea behind the network isn’t dissimilar to modern cell phone towers; there is a signal “hand-off” between satellites, meaning users on the ground may not notice when one satellite moves past the horizon and phone connects to another satellite.

The benefits of the Iridium network are that its coverage is global, and will realistically work on any place on the earth’s surface. Iridium is beneficial for agencies that may send users to any or multiple locations on the planet, especially in unplanned emergencies. Its global coverage has made it very attractive to some industries, such as aviation and maritime. In practice, Iridium phones face the same challenges that any LEO satellites face – the fact the satellites are in constant motion means that they will inevitably move towards positions of less coverage. If a user is in an urban environment, a forest, or surrounded by mountains or canyon walls, signal strength may be intermittent.

Iridium devices connect via unidirectional antennas, and come in a variety of form factors. Though Iridium devices do provide data services, it is usually limited to below one megabyte per second download. The majority of the commercial Iridium devices used in the humanitarian sector are self-contained, meaning they only need a battery charge or connection to a power source to work, however there are a variety of accessories to augment usage.

Due to the geosynchronous nature of the satellites, the Thuraya network only serves a fixed number of geographic locations on the earth, predominantly in Europe, Africa, the middle est, South and Central Asia, and Oceania. 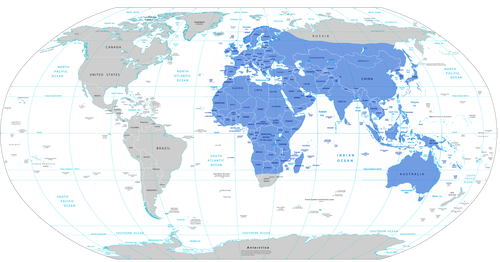 Thuraya voice devices work off the L band spectrum, and use omni-directional antennas to connect. The use of only two geosynchronous satellites drives down operating costs, however limitations include increased latency, increased interference, and the potential for more environmental interference. Additionally, Thuraya unfortunately cannot service anywhere in the Americas, or any location too far north or too far south in any of the hemispheres.

Thuraya also offers internet service through a proprietary terminals. The Thuraya internet terminals are unidirectional, and require physical orientation to connect to one of the two satellites, however there are self-pointing models available at higher costs, and depending on the needs of the user. Thuraya ground terminals can easily reach speeds of to 400 kilobytes per second.

Inmarsat began its life as a non-profit organisation in support of maritime vessels, but was privatised in 1998. Inmarsat began offering global satellite internet data starting in 2008 through what is called the Broad Global Area Network (BGAN). The BGAN network runs off on three geosynchronous satellites strategically positioned to cover most areas of sea and landmass used by human settlements and activity. 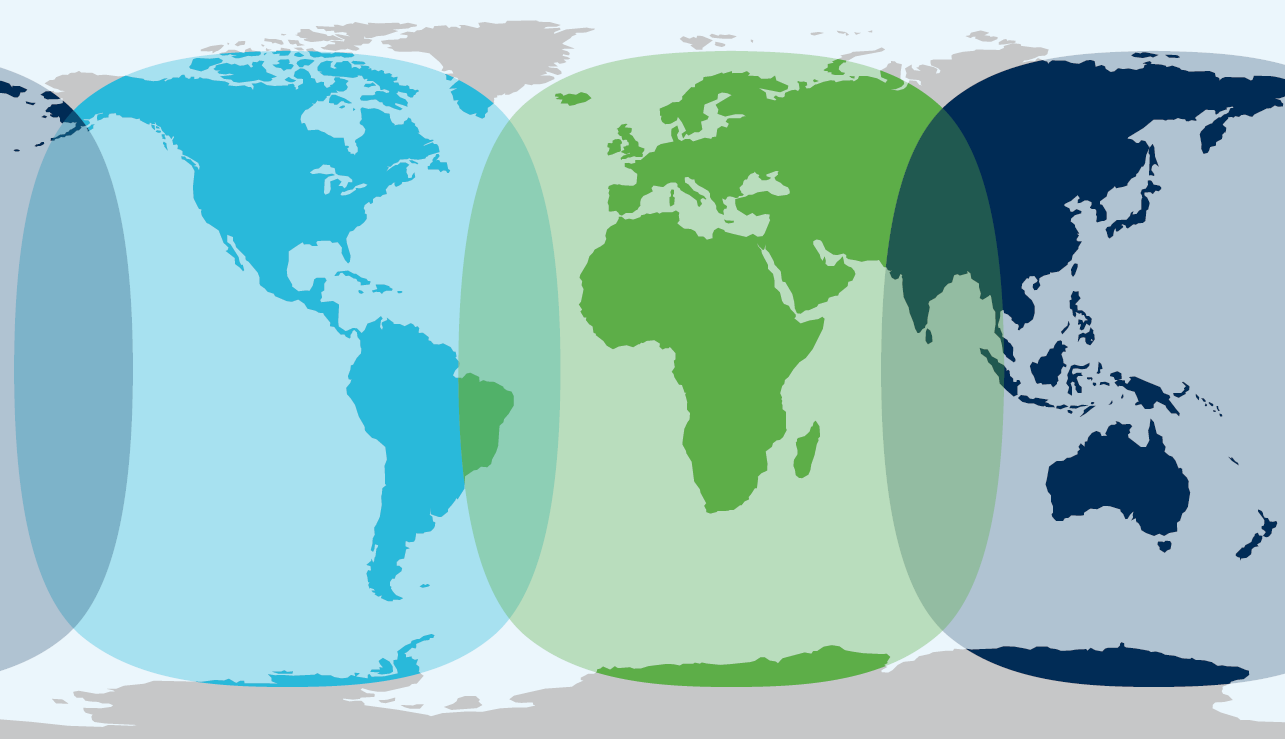 Inmarsat offers a wide range of BGAN terminals that are designed for different levels of throughput and usage. All BGAN terminals are unidirectional, run on the L band, and require orientation by the user, however various models include self-pointing models for use on moving vehicles. Depending on the type of terminal, BGAN speeds can reach 800kbps, and some BGAN terminals can even be linked together to produce speeds of over one megabyte per second.  Because all Inmarsat satellites are geostationary, the same usual limitations apply.

There are a number of additional providers of satellite communications that have either entered the market in the past few years, or will be entering the market in the very near future. Advances in technology and new investments will substantially increase not only coverage, but overall data speeds, while keeping costs at a manageable rate. It is very likely that in the next decade there will be a substantial increase in the number of commercial providers that humanitarian agencies will be able to use.

The operating costs associated with current mobile satellite devices can be extremely prohibitive for many agencies. The physical devices themselves can range from hundreds to thousands of dollars, while the voice and data rates can cost vastly more than regular terrestrial based providers, especially for mobile satellite internet. Any individual or agency who plans to own and operate a mobile satellite communications device should investigate plans up front, and know what costs are going to be incurred.

Any personnel using satellite devices should be educated on their proper use and what costs are associated with each one. As our working environment becomes more and more dependent on connectivity, casual users may not be aware of all of the background data a single connected computer may use, including downloading system updates, emails, or corporate file sharing programs. Unless users are on some form of unlimited plan, all unnecessary data usage should be restricted, and no unauthorised access to the satellite terminals should be allowed! A single mobile satellite data terminal may end up costing tens of thousands of dollars in a single month if used like a regular connection, a problem that is compounded if more than one terminal is in use by an agency.

Some satellite communications equipment, especially unidirectional satellite data terminals, can emit harmful amounts of radio and microwaves when in use. Users should clearly read the instruction manuals and pay attention to any hazard or warning stickers or labels. Users should never stand within 1 meter of the front of a unidirectional ground terminal, and ideally terminals should be placed at higher elevation to avoid risk of mismanagement.

A common mistake many users make is trying to use the satellite connected device indoors, under structures or generally obscured by physical objects. Many casual users are used to mobile devices such as phones that will work in most areas, and may not instinctively understand the need to have a clear line of sight to the sky, especially for users of sat phones. Generally, satellite connected devices will not work under roofed buildings, or any other solid structure that is not sufficiently “radio transparent” – meaning radio waves cannot easily pass through them. Material such as concrete, sandbags, metal rebar, and other common building components can interfere with and block radio waves all together. Satellite connected devices might be able to work under some materials, such as tent material or plastic tarpaulin, however users will need to be aware that this still may not work in all cases.

Mobile satellite communications providers offer a wide range of accessories that assist and enable the usage of the phones and data terminals. These might include:

Depending on the needs of a humanitarian operation, users should consider all options where required, and speak with providers to better understand what may be available or feasible.

Due to the fact satellites provide telephony is never actually tied to a specific country, satellite communications providers have been provided their own “country code.” Calling a satellite phone from an outside network required dialling the full country code prior to the satellite phone number. The calling codes for each provider are:

Additionally, calling from a satellite phone to a terrestrial based network requires dialling the full country code to reach the intended number, even if users are in the same country as the number being called.

The vast majority of mobile satellite solutions work off the use of SIM cards, just like GSM mobile phones, while communications hardware have serial numbers and other identifying codes. When obtaining new satellite communications devices and plans, users should record SIM numbers and International Mobile Equipment Identity (IMEI) numbers of hardware devices. Both SIM cards and IMEI numbers should be tracked, and ideally audited periodically.

In emergencies, devices can be lost, stolen, or simply forgotten about. Users should take care not to misplace SIM cards, as the liability and costs associated with the service are tied to the card and not the device itself. If a SIM card is lost, it can be misused by other knowledgeable persons, possibly for criminal or violent activities. Users should be instructed to report loss or theft of satellite communications equipment as soon as they are able, and if a device is lost or cannot be accounted for, the service connected to the SIM card should be deactivated immediately to prevent misuse.

The majority of satellite communications devices and plans are sold through resellers – other companies specialised in local laws and local markets. Different resellers can negotiate with the primary networks to offer a variety of different plans to end users. These plans may include:

There are also a variety of custom payments and plans that can be available to requesting agencies. As an example, humanitarian agencies that have a high number of active devices may choose to enter global plans that cover all active devices in a single bundle. Additionally, speed or bandwidth can be throttled in some parts of the world during periods of low usage (night time) to allocate to other areas of high usage (daytime) at the same moment. Any humanitarian agency seeking satellite communications devices should speak with multiple suppliers and obtain multiple quotes.