Satellites by definition are above and outside the earth’s atmosphere, and move along curved paths that circle the globe called orbits. Two objects in the vacuum of space will interact with each other, relative to their respective masses, their velocities, and the distances between them. In order to maintain a consistent orbit around the earth, satellites will need move along their orbital paths at different speeds depending on their orbital distance from the earth – moving too slow would result in the satellite crashing back into the earth’s atmosphere, while moving too fast would result in the satellite breaking orbit and flying freely into space. In addition to variable speeds based on their distance from the earth, the further a satellite is from the earth, the longer it’s circular orbital path.

Inversely, the further away from the earth a single satellite orbits, the wider the viewing angle it may have, meaning it may be more consistently reachable from any given point on the earth. However, the speed at which a satellite may orbit the earth at a further distance might dictate that the satellite may be unreachable for longer periods of time, or unreachable at all depending on the viewers location.

Understanding how satellites work is essential for humanitarian organisations that plan to use satellite communications as an integral part of their own operations. 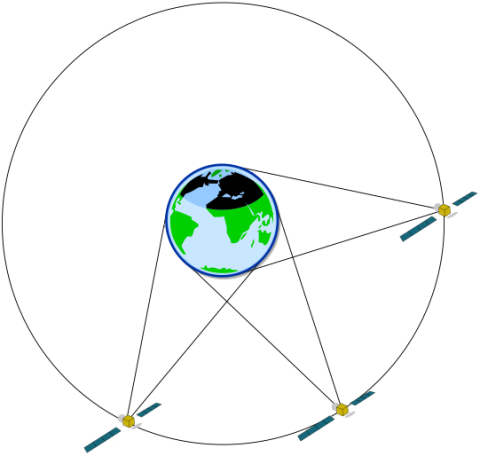 When the time it takes for a satellite to complete one full orbit matches the time it takes for the earth to complete one full revolution on its axis, and when the satellite is orbiting directly above the equator and in the same direction as the earth’s revolution, it is in what is known as a “geosynchronous” orbit. The practical result of a geosynchronous orbit is that when viewed from the earth’s surface, the satellite appears to stay in the exact location above the earth’s surface at all times, and can be called a “geostationary” satellite.

A geosynchronous satellite will always be at a fixed altitude of 35,786 km, and will be able to reach approximately 40% of the earth’s surface in the area immediately under the satellite. At the closest distance there will always be a delay of at least 240 milliseconds, or 0.25 seconds between the time data/a message is sent, and when it is received on the other side. However, depending on the network arrangement, the speed of the physical hardware, and where the transmitter/receiver are within that 40% coverage area, latency can be greater.

Satellites in geosynchronous orbit are useful for when there are only one or a few satellites required or used to provide a continuous service to a wide area. Due to the fact the satellites don’t move relative to the viewer, communications devices accessing a geostationary satellite will need to be permanently installed and oriented, and cannot be moved or reoriented easily. This means that though the satellite receivers are not mobile, they also don’t need to be compact, and can scale to be as large as required for the job.

Unfortunately, single satellites covering a large area means that singular geostationary satellites can and do service a high number of fixed base stations, and all users within the geographic area of coverage are reliant on a single source to transmit and manage their communications. This often leads to limited bandwidth availability, and can cause security problems – a single satellite poses a single point of failure. Additionally, geostationary satellites are easy for governments or militaries with the appropriate technology to block or jam, as the overall wavelength will remain constant and can be balanced out.

LEO satellites offer advantages, in that the increased number of functional communications satellites can dramatically increase the availability of useable bandwidth. LEO satellite arrays also offer some security benefits – if a single satellite has technical problems it likely won’t impact the other satellites in the constellation. LEO satellites are also much harder to radar jam, as their movement makes signal interference more technically challenging.

Unfortunately, LEO satellites also lead to significantly higher start-up and usage costs because sending multiple satellites into orbit and maintaining them adds more cost to the process. Also, due to the fact LEO satellites have narrower fields of view, a consistent signal may be harder to maintain in some operational environments.

There has been a recent increase in the number of LEO and VLEO providers as commercial space cargo becomes more financially viable, and the hardware to make communications satellites becomes smaller and cheaper.