Very High Frequency (VHF) and Ultra High Frequency (UHF) radios are by far the mostly commonly used radio type by governments, military, police, maritime organisations, emergency responders and other entities that operate in environments when regular communications networks may be inconsistent or not properly functioning.

VHF radio waves occupy band between 30 to 300 megahertz (MHz), while UHF radio waves occupy the range between 300 MHz and 3 gigahertz (GHz). VHF/UHF radio waves are propagated by a line of sight path; they will not reach around the curvature of the earth and they can be blocked by hills, mountains and other large dense objects. The maximum broadcast distance of a VHF radio is around 160 km while the maximum broadcast distance of UFH radio is around 60 km – these distances are greatly variable however and depend on a number of operating and environmental factors. In almost all contexts, VHF and UHF signals will not reach their maximum potential distances.

There are a wide variety of applications and devices for VHF/UHF radio transmission, including traditional FM radio and broadcast television, GPS devices and mobile phones. VHF/UHF waves can penetrate buildings and other radio transparent structures, but any object will cause some form of interference; though a VHF/UHF radio may work in a building, the signal will be weaker, and the more buildings in the surrounding area the more impacted the signal will be. Use of VHF/UHF communications in dense urban settings, thick forests, or deep valleys will significantly limit ranges even further.

Some common problems encountered by users of VHF/UHF might include:

Dead spots - areas where signal is impossible to find and communication cannot occur. Dead spots are caused by an object of sufficient size/density blocking the incoming/outbound signal. If radio users are in a dead spot, they may need to relocate to obtain a proper connection, if if that means moving only a few meters in one direction or another. 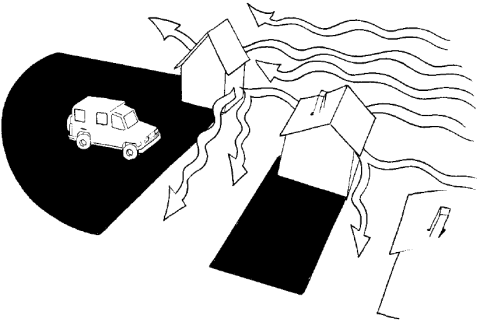 Electromagnetic Interference - Objects that produce sufficient electric currents, such as overhead power lines or electrical plants can also block or interfere with signals, even if the source of the electromagnetic radiation isn't directly between the two radios experiencing interference. If experiencing issues, radio users should try moving away from overhead powerlines or other possible causes to get a better signal.

Despite the relative limitations of using VHF/UFH for two way communication, the vast majority of response organisations prefer VHF/UHF radios due to their portability. The size of the VHF/UHF wavelengths don’t require massive or specialised antennas, while the relatively low energy requirements enable long lasting battery powered portable “walkie-talkies.” Handheld walkie-talkie radios can be relatively expensive, but they are still cheap enough to buy in bulk and distribute to key personnel on the move.

There are a variety of manufacturers of VHF/UHF handheld radio equipment available to humanitarian agencies. Though different devices from different manufacturers call be programmed to operate on the same frequencies and interoperate with each other, buying two different models of radio is strongly discouraged. Handheld radios have a variety of removable and replaceable parts, and having a standard fleet of handled radios will greatly simply for maintenance and repair.

Users of VHF/UHF radios should know how to properly turn on their radios, adjust the volume, and cycle through different channels. Each radio manufacturer may have slightly different standards and modes of operation, so users should familiarise themselves with operation.

Depending on the security environment, users may also be required to keep their radios on at all times, and continually charged. Users should be supplied with charging base stations and spare batteries so radios can be operated even in power outages. Users should also familiarise themselves with how to charge and replace batteries, and if a radio only holds a charge for less than 2-3 hours should ask for a replacement battery.

Roof mounted antenna installations for VHF/UHF base stations are noticeably larger than antennas on the mobile handheld radios, however they are still relatively small compared to other types of wireless communication. A roof mounted VHF/UHF antenna will need to be able to broadcast/receive on the same frequencies as the intended mobile radios, and be compatible with base station in use.

A roof mounted VHF/UHF antenna will also need to support duplex two-way communication. Some VHF/UHF antennas are pre-made to handle both incoming/outgoing channels at the same time, while other configurations will require installing two separate antennas relatively close to each other. Roof mounted antennas will connect to radio base stations through proprietary cables, and unless otherwise configured, the antenna will draw its power from the base station unit.

Roof mounted antennas should be installed at the highest point of the building roof, with no obstructions on any side. The antenna must be installed vertically, so the long edge of the antenna is pointing at the horizon while the narrow point is facing directly upwards. To facilitate this usually, the antenna is attached to a sturdy metal pole which is attached to the side of the building. The metal pole can also be used to increase the height of the antenna as needed. Some agencies may attach antenna to stand alone radio towers to reach sufficient height. Irrespective of what the VHF/UHF roof mounted antennas may be attached to, the proprietary cable should still be able to reach the base station, and the antenna should always be grounded in case of lightening strike.

The advantage of a vehicle installed radio however is that it draws its power from the car’s battery meaning significantly longer periods of operation as long as the vehicle’s battery is functioning and/or the vehicle is in motion. A VHF/UHF vehicle transceiver will be permanently wired to the vehicles electrical system, and requires special installations as holes may have to be drilled in the dash and conductive cabling pulled into the engine of the vehicle where it will be connected to the battery.  Wires will also have to permanently connect to the antenna, and may require special installation as well. VHF/UHF vehicle antennas are also less obtrusive than other radio antennas and can be mounted with simple magnets.